An original publicity photograph (8 x 10 1/8 inch) in black & white. Image of a side view, upper half of the body in suit, looking to the right. Inscribed in ink on the left "To Miss Dorothy de Maria, with kindest regards, Woodland, Oct 26, 1968." Lorenzo Alvary (1909-1996) was an Hungarian-born American bass in the opera stage. He studied law in Geneva and voice in Milan and Berlin. He premiered in 1934 at the Budapest Royal Opera and later emigrated to the United States in 1938 (becoming a citizen in 1944). His debut was in San Francisco in 1939, appearing regularly till 1977. He was associated with the Metropolitan Opera between 1942 and 1961. Very good clean copy of the photograph.

Quintessence of Lorenzo's Works: History of Cosmopolite, or the Four Volumes of Lorenzo's Journal, Concentrated in One, Containing His Experiences and Travels from Childhood in 18115 Being Upward of Thirty-Seven years, Also the Polemical Writings (cont.) 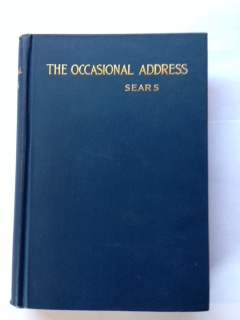 The Occasional Address : Its Composition and Literature