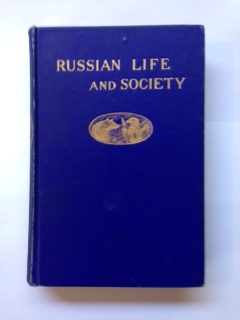 Subtitle : "As Seen in 1866-67 by Appleton and Longfellow, Two Young Travellers (sic) from the United States of America, Who Had Been Officers in the Union Army, and a Journey to Russia with General Banks in 1869. With Sketches of Alexander II and Abraham Lincoln, and Emancipation in the Empire of Russia and the Republic of the United States of America." Publisher's blue cloth binding with gilt lettering and illustration of a bear and eagle on front, some rubbing. 232 pages with index and 31 plates, complete. Inscription on front fly leaf, "Baron Ernest Schilling First Vice Consul of Russia with the regards of Nathan Appleton, New York, 23 October 1904". Nathan Appleton (1843-1906) was the son of prominent Massachusetts merchant and politician Nathan Appleton (1779-1861) and the half-brother of Fanny Appleton Longfellow, the second wife of Henry Wadsworth Longfellow. This volume contains letters and his impressions during a trip to Russia with his nephew Charles A. Longfellow. It also contains chapters on Abraham Lincoln and Alexander II, Emperor of Russia.