Circa late 1940's, early 1950's. Original photograph. 5 X 7 inches. Alexander (1911-1969) was an American film actor and radio announcer. He became a child actor at the age of 5 when he was in Every Pearl A Tear. His movies included All Quiet On The Western Front (1930) and was hand picked by Jack Webb to appear in Dragnet (1952-1959). In this photograph shows a close up of Alexander, wearing a dark tweed jacket, white shirt and dark tie, holding a cigarette. Slight chip on left edge of photograph. Photograph is clean. 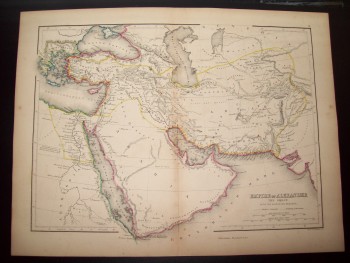 Original Map - "Empire of Alexander the Great; with the Adjoining Regions."

Political Cartoons and Caricatures: From the Collection of Michael Alexander Kahn