Original hand-drawn comic strip art by Brumsic Brandon, Jr. for the comic strip, Luther. Signed by Brumsic Brandon, Jr. in black ink on the last panel. Original black ink on white paper with screentone sheets for texture and shading. "[Copyright] 1972 Los Angeles Times" handwritten under the signature. August 23, 1972. 10 5/8" x 6 1/2." Art is very clean and intact with minimal age wear. Brumsic Brandon, Jr. (1927-2014) was an African-American cartoonist whose Luther comic strip was among the first in the mainstream comic industry to feature an African American in a lead role. Luther was bested only by Dateline: Danger! (1968-1974) which was the first to do so. Luther is about African-American schoolchildren in the inner city and stars Luther, a third-grade boy who is named after Dr. Martin Luther King, Jr. The comic strip often takes a satirical tone to address themes of racial equality. Brumsic's daughter, Barbara Brandon (b. 1958), became the first nationally syndicated female African-American cartoonist and sometimes helped her father with creating his comics such as applying screentone sheets onto the panels. Luther ran from 1968-1986. This is a four-panel comic strip. Panel One: Luther and Pee Wee, a kindergartener, are shown in silhouette against a city skyline in the background. Luther sits on a step and talks with Pee Wee. Pee Wee says, "Luther, you've lived around here for a long time. Right?" Luther replies, "All my life! Why?" Panel Two: Pee Wee says, "You know this neighborhood! Right?" Panel Three: Luther says, "I think so, Pee Wee! Why?" Panel Four: Pee Wee asks, "Where's Easy Street?" 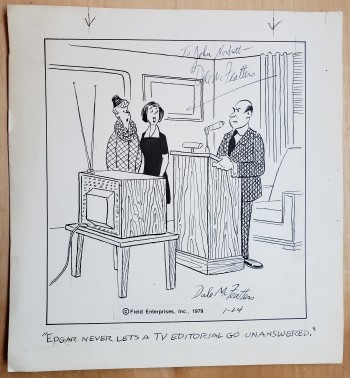