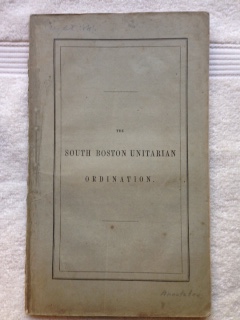 64 pages; gray paper wrapper (5 1/2 x 9 1/4 inch). Annotated by the Rev. David Fosdick, Jr., circa 1853. Theodore Parker (1810-1860) was a Unitarian theologian and clergyman as well as a social reformer. He emphasized a rational approach to religion that was considered radical for its time. Parker came out with his thinking in a sermon preached at an ordination in South Boston in 1841. The sermon: "The Transient and Permanent in Christianity" set off a firestorm of criticism among the traditional clergy, who considered it anti-Christian. This pamphlet, published nine days after the ser...
View More...